The location of the first church in this community was near the site of Fort Blair (Baxter) in order to better serve the troops who were stationed there in 1868. The location chosen three years later was on the corner of West 9th Street between West and Wyandotte Avenues. Records indicate that Jesuit Father Phillip Colleton was the first priest to say Mass in the brick structure. He would continue to minister to Saint Joseph’s until around 1873.

There were to be several additional moves before the final resting place for the church was selected. In 1917 a new building was erected by Father Thomas Gorman at the corner of Fifteenth and Chouteau Avenue. He was a busy builder because diocesan records indicate he had built a church the year before in Columbus. At any rate, this structure was moved to East Twelfth Street in 1920. After remodeling, Saint Joseph’s was picked up and moved to its present location in 1946. Construction was of wood frame and brick and included a downstairs hall in which social and educational functions could be held.

Pastor Father James Donoghue participated in the dedication ceremonies in 1948 along with church and community leaders.

The great flood that hit Baxter Springs five years earlier caused many church records and photographs to be lost. Many others had to be destroyed due to the threat of typhoid.

The pastor is Father Jeremy Huser. 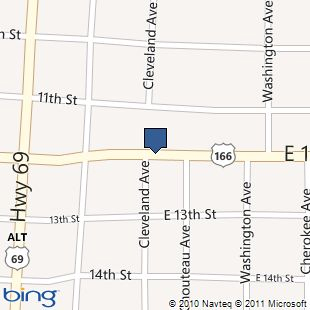