Father Philip Colleton, SJ, founded Scammonville mission in 1868 “in favor of coal miners and farmers”. It was fitting that a parish with a name like Saint Bridget would have its start in a house with the name of O’Malley. The first Mass was said in the John O’Malley home located east of where the first church was to be built the following year. It was also fitting that a priest by the name of Dougherty would be the first resident priest. The Irish names turn up continually in the history of Saint Bridget, as it was in the Murphy house that the Sacrament of Confirmation first took place in 1872. Land was obtained for the church construction from the Kennedy family, 1/2 mile east of Scammon, which was at that time called Scammonville. When the church was completed in 1908, it proved to be a large, beautiful brick structure. A fine new rectory followed during the tenure of Father T.J. Hurley who stayed at Saint Bridget from 1903 until 1912.

Before the permanent church was constructed, Jesuit Father Eugene Bonocini had built a second larger structure in what is now the west end of the cemetery. He enlarged it twice, adding a large room for a parochial school. The school was enlarged by Father M.J. Casey. The present parish facility includes a brick hall which went up in 1948. The two-story structure contains classrooms, kitchen and auditorium facilities.

The most recent activity at Saint Bridget’s included a complete renovation in of the church in 1985 and a significant new addition to the old parish hall. The current pastor is Father Jeremy Huser. 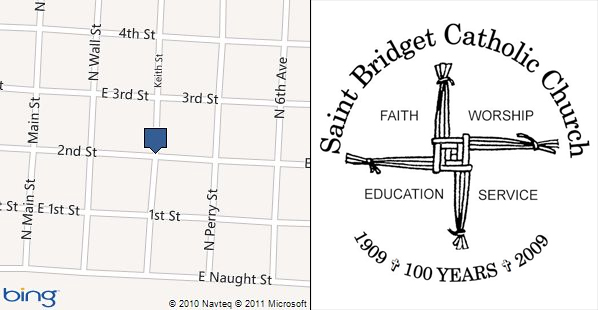